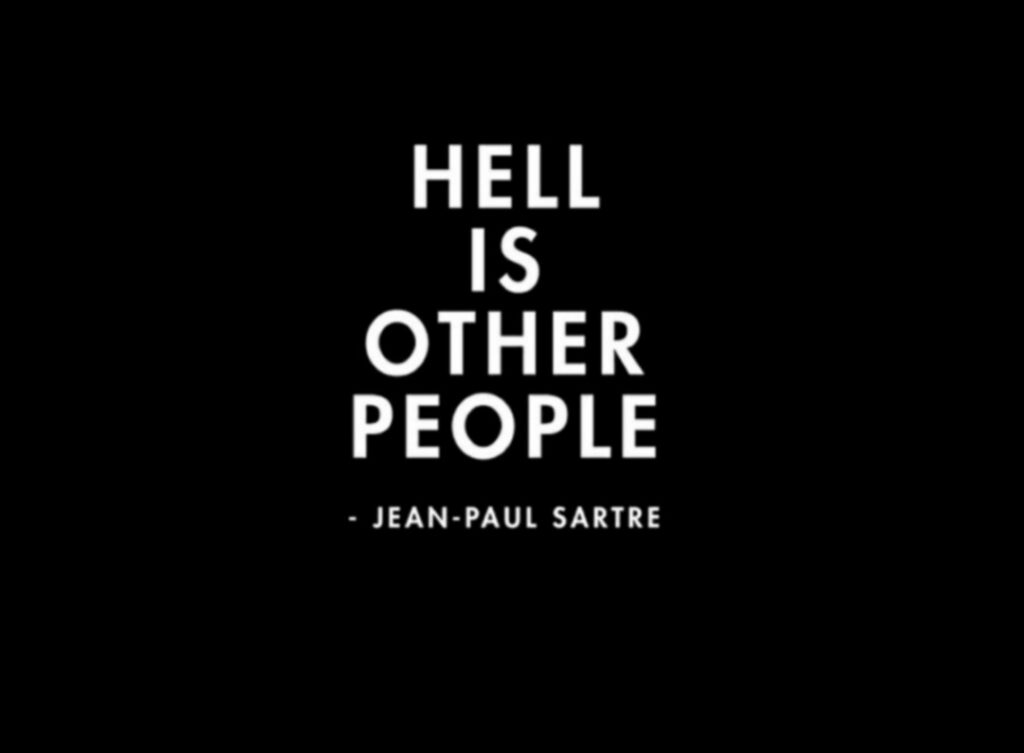 Can it be true, do I really agree with this dude? Let’s see.

What (rather, who) cause all of my problems? People.

Who haunt me in my nightmares? People.

Truly hell is other people. But wouldn’t having only one lookout be pessimistic? Yes, so if other people consist of hell. Then some others also consist of blissful heaven. We get the people we deserve, if we deserve hellish people…so be it.

The philosophy of hell and heaven, good and bad deeds, is not entirely untrue. Sartre being an existentialist discusses about life having meaning for both kinds of people, (those who believe in the concept of afterlife, and those who don’t.) if you believe in afterlife, the concept of heaven, hell and karma can come pretty easily to you. In what Sartre quoted, you will find literal meaning. Truly people around you do consist a piece of hell in them. Tormentors who just give bad vibes, you know?

But if you don’t believe in the notion of afterlife, if you feel that it is just present to impose a sense of discipline and alive conscience among people, that they do good deeds with an aim of going to heaven. If you feel that this is the only reason of conceptualisation and segregation of humanity, then your meaning of hell will surely be different.

Maybe you grasp hell as a metaphor for bad or unlucky stuff. Things that don’t go well with you or your surroundings. Again, it may be called as people who give bad vibes. (Layman’s terms ;)) and people who give out these vibes, and are filled with this supposed ‘stuff’, may be your simple perception of hell.

‘Hell is other people.’ Is thus a polysemy. As it can have multiple meanings and can be seen through infinite perceptions. Hats off to you, Sartre.

3 thoughts on “‘Hell is other people.’ -Jean Paul Sartre”